My Primary students (aged 11) are studying technology and inventions at the moment. I used this activity to introduce the topic – it worked well. This idea could be used for generating interest, sharing personal responses, developing schematic knowledge, revising comparatives, developing spoken fluency, and much more… It’s amazing what a few images can too – it’s fairly low-prep.

Give them process language to help, e.g. 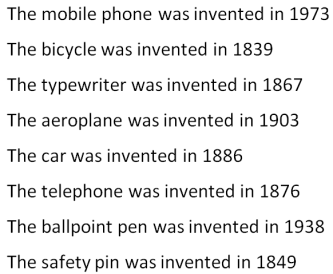 6. Use the order to play a memory game. Demo the following:

The bicycle was invented before the safety pin.

The safety pin was invented before the typewriter.

The typewriter was invented before the….

Ask different students to continue the sequence. Once complete, instruct groups to remove one or two images from their order….e.g. ’take away the car and the telephone’. Go through the sequence again, awarding points to students who remember missing items. Repeat until students remember the whole sequence without any images! Five minutes of fun!

Next, students share their ideas with a partner. They re-order the pictures on their table depending on their views, but they must agree on the new order. Again, process language will be needed here:

Students then work with another pair (in a group of 4). They compare ideas/orders, discuss and reorder the pictures again to represent the views of the whole group.

In practice… how did this work?

I mentioned a technique for drilling vocabulary in this other post