Thought I’d start sharing a semi-regular post on materials writing for those (semi-)interested. Just news, views, jobs I see and stuff. Whatever, don’t know yet!

9 ways to get noticed by an ELT publisher

This is a new blog post from Atena Juszko, ELT Editor. It has some really useful ideas and some good links. The ones for publisher blogs might be of interest to some. I do/have done most of the stuff on the list, but I shy away from presenting at conferences. I might do more in the future, who knows. Anyway, useful post. Atena mentioned an old post of mine about writing for ELT magazines – I saw a tweeter share this recent post from Tim Thompson on the same topic, which may be useful for those looking to build their presence in the industry.

I have an article coming up in ETPro about the benefits of having a LinkedIn account for materials writers. While that won’t sound particularly riveting to most, I had a useful ‘LinkedInteraction’ (see what I did there…?) last week. A new contact had some work with ‘Digital Learning Associates’ listed on their work history. I did some research on these guys and some speculative emailing. Turns out…

Anyway, they look like a company worth checking out.

I missed the Leo Selivan webinar this week. I was all geared up to watch it, then I decided to watch the second half of Spurs vs Leicester instead. It sounded like it would be a good one. I read a review/critique of Selivan’s work on Geoff Jordan’s blog the other month. In all honesty it was pretty damning, which made me want to watch the webinar to learn what all the fuss was about (I’m not familiar with Selivan’s approach tbh). IATEFL MaWSIG say they’ll be a link posted up this week to the recording, so watch this space.

Speaking of IATEFL webinars, there’s another materials-related one coming up:

Carol Lopes – ‘Diversity and inclusion in materials and / or the classroom’ (2nd March, 2pm GMT).

I watched this IATEFL 2018 plenary from Dorothy Zemach recently. If you missed it first time (like me), it’s really worth a watch.

Speaking of plenaries, Steve Brown’s plenary at #BBELT2019 was trending on Twitter the other day. This type of ‘break the status quo’, ‘those damn global publishers’ stuff always seems popular – I’d say most of us TEFL/TESOL teachers are a willing audience. Tyson Seburn’s summary tweet on a Steve Brown slide was interesting:

Fair points, although as I mentioned in a recent post, I’m not sure PARNSIP in coursebooks is actually as big an issue as people often make out.

Having said that, I’ve had some funny ‘no, because of PARSNIP’ feedback in the past. Once, when writing content on British pastimes, I wasn’t allowed to mention that pub quizzes actually took place in a pub. I also couldn’t mention that a fry-up included bacon, sausages or black pudding. That was a particularly PARSNIP-less project.

I’m sure most of you clocked this, but Nik Peachey is starting his own publishing company. You can read about it here. He says that over 400 writers have shown an interest in the project, which sounds promising.

There were 3 Development Editor jobs advertised in the UK this month. One for Cambridge (Primary ELT, closed), one for Macmillan (closed) and the other is at Cengage (still open, click here).

I had some work writing Academic and Exam Skills booklets on the go before xmas. All finished, back from the designers and being piloted. They look pretty slick actually – good for the portfolio. I was going to continue this work as it’s fun to write, but I’m maxed out hours-wise. So much going on!

I’m working on various digital projects at the moment. Here’s an EDI-related resource I wrote before xmas too.

Topics not to include in your materials…

Parkour. Matt Noble was having a good old rant about it yesterday. 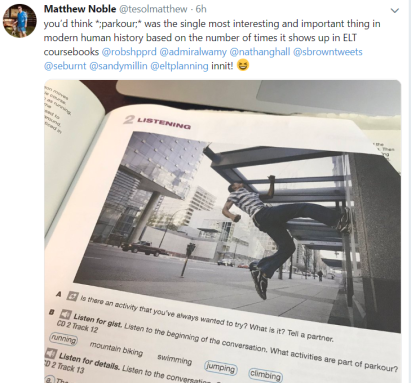 Check out the thread if you can – it gets pretty funny.

I reviewed this new teacher development platform from Language Fuel recently. I just read that their new ELT Content Editor is Jill Hadfield (I know the name from Communication Games). I’ll keep my eye on how that platform develops.

Finally, a quick mention of ELI Publishing. They sent me a big box of stuff to review recently – it does look like their range of graded readers is good. Review of some content in general can be found here. 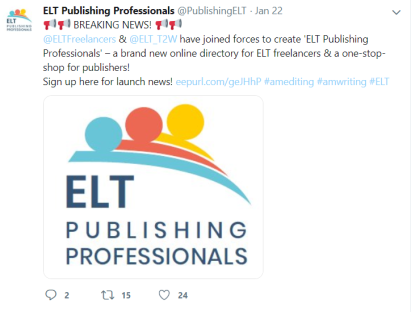