I always feel embarrassed when I speak up for coursebooks. I think I’m supposed to hate them. Everybody else seems to, so I guess that’s the right thing to do. According to Steve Brown’s latest post (well worth a read), even coursebook writers themselves are getting bold enough to criticise the practices of big publishers. Steve reckons that, in the grand scheme of things, such criticism is pointless. I say that the writers should keep doing it. The more they bite the hand that feeds, the more likely that publishers get annoyed and look for writers elsewhere. I’d love to get a message in my LinkedIn mailbox one day that reads:Dear Pete,

Hugh Dellar has got all contrary and we’re a bit fed up with him. We hear you’ve done a bit of materials writing. Are you likely to keep your mouth shut and maintain the status quo if we offer you £30,000 to write our new coursebook?

It goes without saying that I would turn them down (note publishers – this paragraph is NOT true). I mean, I’ve got my pride to think about. How can I justify writing a global text that perpetuates neoliberal ideology given my various political and social stances? Because ELT coursebooks do perpetuate neoliberal ideology, don’t they? It’s obvious, right?

Neoliberal ideology internalises entrepreneurial behavior: as Holborow (2007, p. 51) puts it, “the ideology of the global market insinuates itself everywhere.”  The primacy of the market pervades all areas of our lives, in such a way that we act as atomised individual agents, part of a global society where competitiveness is the overriding goal of our activity. 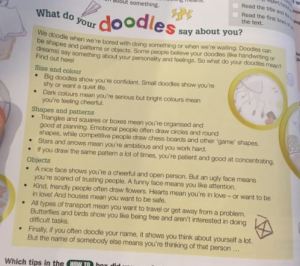 Wow! That is exactly what my coursebooks do! How did I not see that? The other day, when a teen class and I did a reading on ‘What do your doodles say about you?’ our thoughts instantly turned to neoliberalism. The text made a series of fleeting assumptions about the doodler’s personality – drawing big doodles means you’re confident, dark colours mean you’re serious, etc. Clearly, this is evidence of the overriding goal of competitiveness in society. You should have seen how competitive some of my learners got when one of the shiest students in the class turned out to have the most desirable personality traits of being confident, patient and ambitious. Ambitious, wow. That’s big in neoliberal terms.

On the surface, this text seemed to be a fun way to shoehorn in a bit of vocabulary related to personality. But deep down, it was designed to perpetuate the ideology of the global market, shaping the way we doodle to build ourselves as individuals.

Is it at all possible that, as might be the case with Keith Copley’s recent article, if you want to find that coursebooks are perpetuating neoliberal ideology then of course you’re going to find it? Behind all big concepts and jargon in both Copley’s article and Geoff Jordan’s summary (I really do need things dumbed down to be honest) there’s this interesting line from Geoff:

The extent to which students, the consumers of the product, are critical of the content of ELT coursebooks is a sadly underresearched area, and would certainly be a productive area of research for future study.

Seriously, we make all these assumptions about how coursebooks are manipulating and shaping this global market fuelled by neoliberalism, yet we seem to be completely ignoring who the market is for anyway. I posted about an article by Hewings a while back who showed that his Vietnamese learners ‘misinterpreted’ many of the images used in coursebooks. These publishers have got a tough job pushing their neoliberal agendas on the learners then. They don’t even interpret a picture as we intended it, let alone a text.

Oh wait, it’s more subtle than that isn’t it? The publishers know this is what they are doing, but they are imparting these neoliberal ideals more subliminally. They do other neoliberal things too, like sanitise coursebooks to make them bland or inoffensive, in turn making them globally more appealing.

This sanitised approach is, of course, contrary to my own style of teaching. The first thing I want to achieve in an ELT classroom is to rile my students and force them to consider a load of social or political ideals that they vehemently disagree with. It’s bound to make them comfortable. Yeah, stop sanitising coursebooks why don’t you?!

We’re not bound by coursebooks, and neither are the learners. I often feel like people who hate global coursebooks want us to think of them as a straitjacket. In reality, I’ve heard anecdotes from teaching friends about dealing with a whole number of ‘taboo’ and PARSNIPy issues in the classroom. Because they are teaching people, and people have opinions, and often they like sharing them. Normally, when they are not forced into confrontation or to express an opinion they don’t want to – which coursebooks facilitate by sanitising their content. Or maybe that’s not what learners actually want. Maybe they do want coursebooks that are full of taboo subjects and they want a full blown argument for 90 minutes. I don’t know – and I’m guessing not many of us do. As Geoff Jordan says, what learners actually think of these books is under-researched!

Ok, rant over. There are certainly overriding issues with coursebooks that do influence our day to day practice as teachers. The grammar-based syllabus, grrr. Pretty much every coursebook I’ve used follows this structural approach. I’m happy that writers like Hugh Dellar are (reportedly) trying to address this (link to Steve’s post again, he mentions this). But as for all the neoliberal stuff, I’m getting fed up with the term to be honest. And PARSNIP, well I’m back to self-interest again, because that’s neoliberal. I’d like to write coursebooks but I’d be rubbish at writing about politics. Doodles? Doodles are where it’s at. And very neoliberal.