We did this activity a few weeks ago as an intro to our module on environmental problems/issues. It’s a context builder more than anything, and introduced some of the language that the learners needed for their final task (produce a leaflet describing an environmental problem and listing solutions). So, basically…

Step 1:  Learners list all the natural features of a beach they can think of: sand, sea, birds, cliff, etc.

Step 2: A4 paper, fold into quarters so there are four boxes.

In the top left-hand box (landscape) instruct learners to draw a beach. BUT they can only include natural features, nothing manmade.

Give them a time limit, like 3 minutes or something. I did a quick 30-second sketch on the IWB as an example. So… um… don’t laugh… 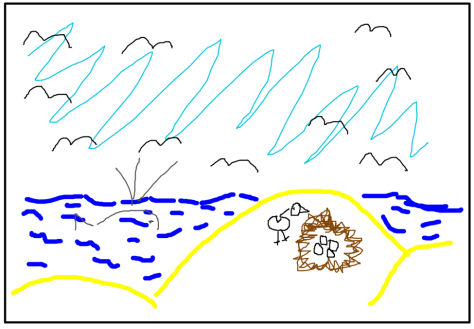 You could get some more speaking out of that if you wanted, up to you.

Step 3: Learners think of manmade features of beaches, or things people do at the beach/nearby in the sea. Thought shower this together and elicit ideas, probably easier. I mean stuff like…

Step 4: In the top right-hand box, learners draw their beach again. This time, they imagine the beach after humans have been allowed to go there. Some of them see where this is going…! I demoed one thing that might change to my first image.

After they draw (3 mins), reveal your own ‘after humans have been there…’ image. Sorry for this again, haha!

(The stickman is riding a quadbike by the way, not playing tennis, or singing on a stage…). 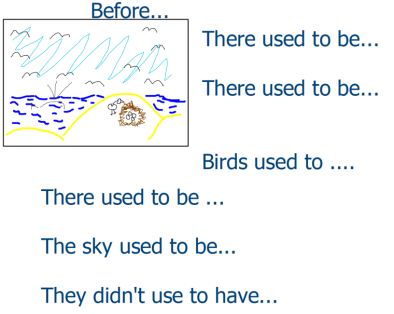 Briefly explain ‘used to’… elicit sentences about the model drawing:

The birds used to nest on the sand dunes.

There used to be whales swimming in the water near the beach.

Students write their own sentences describing the ‘before’ image under the pic (bottom left square). They use ‘used to’ if things were different in the ‘before’ pic compared with the after pic (most things will be!). Do peer correction or sharing ideas activity here as you wish…

Step 6: You can probably guess… 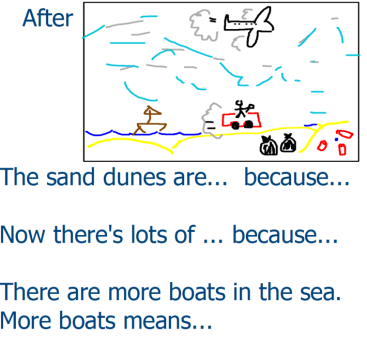 Now there’s lots of rubbish on the beach because people litter.

The sand dunes are flatter because people ride their quad bikes on them.

Step 7: So, what can be done about these problems?

Students think of ways to deal with the issues. Encourage them to go beyond ‘stop people littering’; Elicit ideas, board interesting stuff, upgrade language, etc.

After they discuss a bit, you could then provide prompts to help them share their views. These are what came up in the lesson… 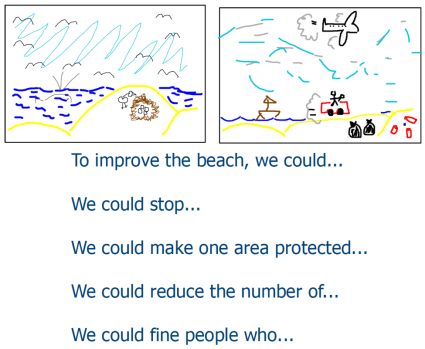 That’s it really, it was only a context builder but it got the learners talking. We followed this up with more focus on ‘used to’, cause and effect, further content on environmental issues, etc.