Home › General › Teachers – which sea creature are you?

Teachers – which sea creature are you?

I wrote a post a while back comparing learners to different birds. Svetlana at ELT-cation requested more, so here I’m comparing teachers with sea creatures. Which one are you? For a quiz version of this post click here.

(Note: this is more about behaviour than looks, so don’t be offended if you’re a frogfish or something!)

The creature – a fish that gives back what it takes. They spend most of their time munching on coral. The coral then ‘reappears’ as white sand on tropical beaches. They have a weird ability to create a cocoon out of mucus at night. This stops other creatures from picking up their scent so they can rest easy!

The teacher – very well balanced. They are always happy to share resources and allow other teachers to benefit from their industrious nature. They’re seen as a really positive influence. Although their great work often goes unnoticed, the bits that managers recognise mean ‘Parrotfish’ avoid any major problems in the staffroom.

The creature – one of the most beautiful and graceful creatures in the ocean. Everyone who sees a green turtle is in awe of it. They can live up to 100 years and have very few predators. They allow other fish such as remora to cling to their shell in a mutually beneficial arrangement – the fish keeps the turtle clean, the turtle offers the fish protection.

The teacher – vastly experienced, almost effortless in the classroom, the teacher everyone wants to observe, and a manager’s dream. Well, apart from the odd manager who gets jealous… ‘Turtles’ are great mentors for other teachers – not only do they offer support, they are keen to benefit from their peers whatever their level of experience.

Pete’s note: I’ve only seen a handful of green turtles.

The creature – solitary. They’re very aggressive when others enter their territory. Although small (they grow up to 75cm) they will have no issues with attacking bigger fish and can give scuba divers a nasty bite.

The teacher – hates being observed. The classroom is their territory and it is to be defended. The mere hint of an observation gets their ‘dorsal spine’ up. Line managers beware.

The creature – an amazing ability to impersonate other species. Highly adaptable – no other creature has the capability of mimicking so many other species in order to evade or scare predators. Not only clever, but aggressive… it will use its mimicking to sneak up on unsuspecting prey.

The teacher – highly versatile. They have plenty of goals outside teaching English – they constantly see TEFL are more of a stop gap. They often resent it when people pigeon-hole them as an English teacher. However, the irony is that their ability to adopt multiple roles is what makes them such a good teacher. Their unsuspecting prey are EFL managers, who perceive them as being disinterested in career progression…

The creature – highly unorthodox. They have a strange appearance and swimming style, but they get by! They have the fewest vertebrae of any fish. Susceptible to parasites, but get help from other creatures to deal with this. I bet many scuba divers would love to observe a sunfish!

The teacher – their methods are experimental and often questioned but they still get results. Just like sunfish has less structure, these teachers place far less emphasis on things like coursebook syllabi. However, they do things their own way and others (students and teachers) benefit from this. Worth observing.

The creature – the fastest fish in the world. Solitary. They get most of their work done at ultra-high speed. They are hard to catch, so pretty valuable. Few predators.

The teacher – very efficient. Other teachers struggle to understand how they can get all their planning done so quickly and maintain such a high quality. Very few people can compete with them – they are highly sought after. They don’t really socialise with work mates so they’re a bit of an enigma. 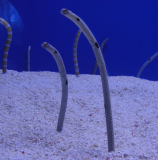 The creature – live on the sea floor in burrows. They poke their heads out but keep their bodies concealed. They hang around in groups. One of the most frustrating creatures for a scuba diver – the moment you get close they just sink down into their burrow like they don’t exist!

The teacher – alert and active, regularly chatting with peers. Tend to avoid managers and other perceived dangers.

The creature – KEEP YOUR DISTANCE! One of the most dangerous fish around. A stonefish (that one you tread on and die) is a type of scorpionfish. They ambush prey, making them even scarier. You’ve been warned…

The teacher – I sometimes come across toxic characters in the staffroom. The toxic element is their negativity. Try your best to avoid getting stung because negativity is highly infectious.

The creature – often really colourful and amazing to look at, these are impressive creatures. The colour is a deterrent – a lot of other creatures avoid them. However they are just basically sea slugs, so for all their beauty they don’t move much.

The teacher – they produce all singing and all dancing lessons using all the latest technology. People often think they’re really innovative. Their use of snazzy tech may look great to others, but in practice its actually quite experimental and on occasions a bit unprincipled. Having said that, they are moving forward (read moving with the times), even though others don’t notice it.

The creature – one of the few big filter feeders in the ocean (another one is the Basking Shark). Whale Sharks spend a lot of time with their mouth open. They are also pretty docile. Every diver would love to swim with a whale shark!

The teacher – teacher talking time is pretty high, but who cares? They’re relaxed, and they’re popular! They’re probably unaware of how respected they are.

So, have you met any of these creatures and which one are you?!

All other images from Wikipedia (c). Click on image for original source