The task was for my teens to produce a doctor/patient dialogue. During the lesson we reviewed vocabulary for illnesses, listened to a model conversation, identified important language (e.g. giving advice), and so on. As a pre-task students worked in groups of 4 and completed a short review task at various stations around the room: 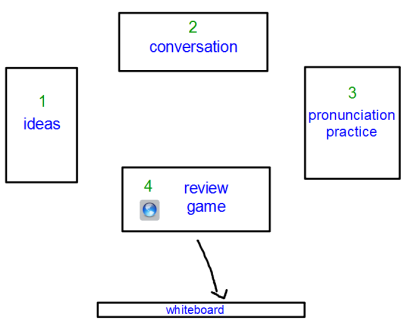 At station 1 students listed target language or other useful phrases that might help them when writing their dialogues.

At station 2 students reviewed a dialogue from the lesson. They put the dialogue in the correct order and practiced reading it (text from Beyond A2+ published by Macmillan).

Note: thanks to Rabia Ahmad who pointed out the spelling error in the above dialogue!

At station 3 students practised saying chunks of language, with a focus on how they sound in connected speech. During the activities this was the station I monitored as students required clear modelling of each phrase. On reflection, using a pronunciation task at one of the stations was problematic (classroom management-wise) but still useful.

At station 4 (the interactive whiteboard) students reviewed useful vocabulary by playing a game on Quizlet.

I could have used various different tasks during the workstations. The review game proved to be a bit of a distraction on a couple of occasions, but it was a fun feature to include. The activity at station 1 was probably the most useful as students had some good ideas to refer to while creating their dialogues.

Feature image: Puzzle by Davo Sime from the Noun Project