I’ve seen a few things Shakespeare related on the British Council Facebook page. I’ve taught a bit of Will over the years. Here are 5 activities that have worked well.

I got this idea from a summer school with Oxford International.

Gather a list of famous quotes from a range of English literature.  Read students the quote, and have them guess if it’s a line from a Shakespeare work, or if it’s Fakespeare – from something else. Give a bonus point if they know where any Fakespeare quotes actually come from:

This activity has a few benefits…

I’ve often read that the best way to orientate students to Shakespeare is to focus on his storylines BEFORE the language he uses. He was a great storyteller, and the themes in his work are like those in soap operas – love, betrayal, humour, murder, etc.

Rather than soaps, you could try using one of the many Hollywood adaptations of Shakespeare as a starting point for your learners. Consider introducing the storyline of Hamlet through the well-known Hollywood pastiche, the Lion King.

If you want to get a cheap laugh, how about showing your students some of the trailer for the really cheesy Sci-Fi B-movie ‘Forbidden Planet’, then reveal that its storyline is rather similar to Shakespeare’s The Tempest! Well, apart from being set in outer space…

You could base some lessons for a teenage class around the movie ’10 Things I Hate About You’, before announcing it is an adaptation of The Taming of the Shrew.

One of the best Shakespeare related activities I’ve done was inevitably a drama-based one. After all, he is meant to be performed.

I came into class ready to teach Romeo and Juliet to a group of 14 year old upper-intermediate Italians – forgetting that they were actually from Verona and knew the story inside out! Fine, I thought. Prove it. I asked them to summarise the story in 300 words – they didn’t miss too much out. Then I showed this clip as a model:

I challenged them to create a similar performance for Romeo and Juliet, in one take, and over 2 minutes. I also gave them 6 authentic quotes from the text to include. The result was one of my best achievements as a teacher, but unfortunately I can’t post it up!

I found Shakespeare a nightmare to understand at school, and I still struggle now. Using a movie adaptation alongside the text as you teach it is a good way to maintain interest, and to allow learners more visual or verbal cues to better understand what’s going on. 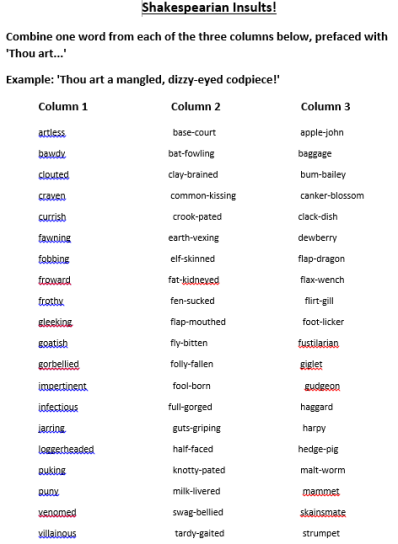 Get them to choose one word from each column, combine them and shout them as an insult to their partner.

What benefits can this have? Well, not many regarding useful vocabulary! But think about it – it doesn’t matter what words the learners are using, they know they are meant to trade insults. So they will alter their tone of voice and manner to do this. Tell them to think about this when they watch the accompanying movie version of the Shakespeare play. They might struggle to understand the dialogue, but they can get far more than they think just from watching the way characters act, and listening to the tones they use.

Aside from that, you will get the odd chuckle from the students when they call each other ‘common-kissing foot-lickers’.

I got this activity from teachers at Durrington School a while back. I mentioned previously that Shakespeare’s plays are full of common themes which every learner can associate with. You can exploit this by focusing on moral dilemmas arising from these themes.

Below are various actions performed by characters in Macbeth. You can ask students to rank these in order of seriousness, gravity, etc. They can do this without even knowing that these are important actions in a Shakespeare play. No doubt they will be keen to discuss these moral situations.  You’ve engaged them in Shakespeare without even showing them the text. 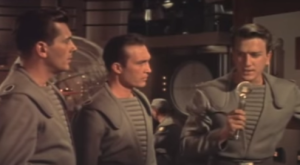 p.s. any excuse to include Forbidden Planet in a post! 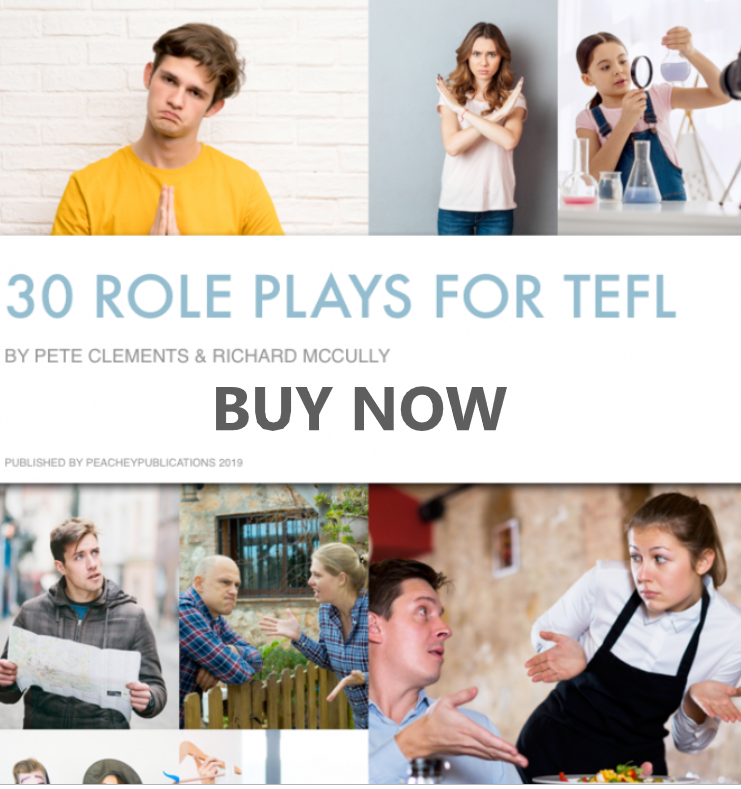 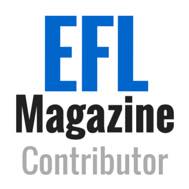 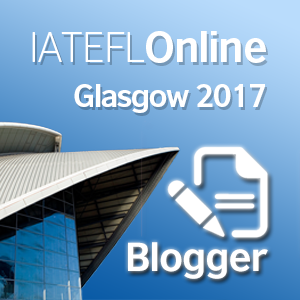