Today I taught one of my best lessons ever.  It’s a massive day for the UK, and there was no way I was going to ignore the general election in class. I had a group of 14 year old intermediate Austrians, so I couldn’t guarantee they would be interested in politics. When I told them the topic for the day they groaned. A few hours later they were walking out of class arguing about UKIP’s immigration policy, whether we should lower the voting age, and whether the UK needs nuclear weapons.

Here are the lesson resources.

I planned a lesson based on an online quiz I took from this site. It asks you to agree or disagree with certain statements, then says what party you should vote for based on your answers. The wording of questions on the site was a bit complex, so I simplified the questions and also did a bit of pre-teaching. Stuff like this:

My lead-in was a simple statement to discuss in pairs, personalised to the group:

‘There are too many immigrants in Austria’

This almost exploded into a lesson-long conversation, so I knew I had them engaged! I explained that today was the election, and that they would be choosing their favourite party. They sighed, thinking it would be boring. Then I gave them this: 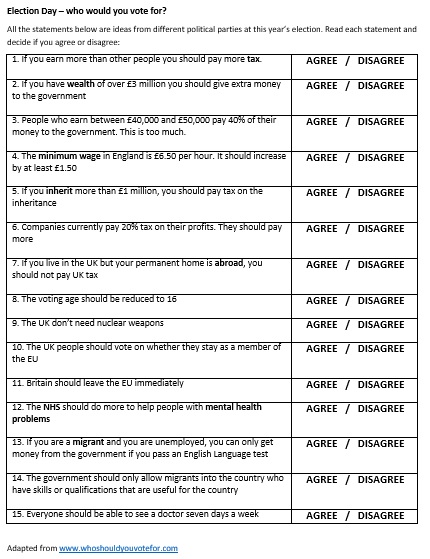 They decided on each statement themselves. Then I paired them up to discuss similarities and differences. I rotated the pairs a few times to give them time to speak to others. This was fluency practice, and I did delayed feedback. However, the ELT things here are irrelevant. I had students debating these statements freely for over half an hour. Fascinating.

I made a table to explain which parties shared the students opinions. The students had to look at the table and see which parties agreed with their views for each statement. They awarded any party that agreed with them one point per question on a tally chart. After completing this for all 15 questions, they wrote a total points score for each party. The highest scoring party was who they should vote for:

Note: I’m not saying these answers are entirely accurate. It took me ages to read the manifestos and things might seem skewed. A question mark means that no party actually agreed or disagreed with a statement – i.e. I couldn’t find evidence of their stance in the manifestos. You know that I provide all resources as a word document, so you can alter anything as you wish. The * symbol just means that a party has a similar idea, but explain it differently.

The election may be over (very soon), but this activity is easily adapted. Instead of ‘I’m voting for…’, why not make this a conditionals practice?

Or why not just change the names of the main parties in England, and make this an activity to do any time you want? The parties don’t have to be real, and you could even get students to create a pamphlet, poster, or speech promoting their chosen party. Personally, I’m going to use this for a few weeks while it’s topical, as it will help to explain our current political system and the party in power.

Another thing to mention. I only talked a bit about the parties AFTER the activity. I wanted the students to share ideas and opinions primarily.

I asked students to decide on the three most interesting statements in the questionnaire. They wrote these in the table below. Then they wrote their own question related to politics. Then I sent them off to speak to people around the school, and report back to me. Under the ‘agree/disagree’ sections there’s space to write notes if needed:

As feedback, I ask students to analyse the answers that each person gave. Did their answers match to the party they vote for?

One thing. Politics is a sensitive topic. Make sure that students are happy to accept answers like ‘it’s private’ or ‘no comment’.

Believe me, I did not expect this lesson to be so engaging. It was worth putting the planning hours in. Enjoy!

Oh, p.s. here were the results of my class: